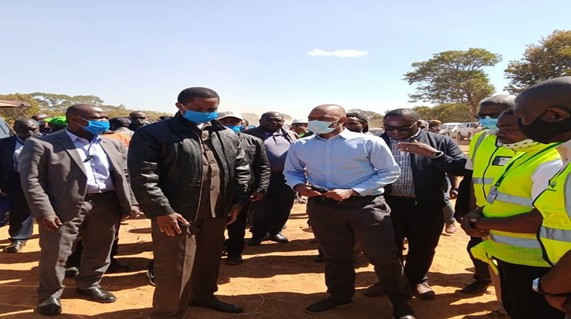 President Edgar Lungu has assured the nation that Government will continue to balance delivery of development to all parts of the country.

The President said his Government wanted every part of the country to receive equal share of development.

The Head of State was speaking in Luwingu, Northern Province, recently, after inspecting ongoing road construction works of the 120 Kilometers Luwingu-Nsombo-Chaba-Chilubi road project.

The President said the Luwingu-Nsombo-Chaba-Chilubi road project, which is being undertaken by China Geo Engineering Corporation, was part of the National feeder road program.

“We promised the people that we will deliver development to all parts of the country and that is what we are doing. In the past, Governments only brought development to the people during elections but here, in Luwingu, there is no election now and we are here delivering in accordance with our promise,” the President said.

The Head of State added that roads make a crucial contribution to economic development and growth because once a road was constructed it brought with it other important social benefits.

“Roads are of vital importance in making a nation grow and develop. Roads, provide access to employment, social, health and education services thus being a crucial component in the fight against poverty. It, therefore, always surprises me when I hear some people asking that are we going to eat roads?” he said.

Meanwhile, President Lungu said the Government was making progress in the implementation of the 20 % sub-contracting policy for local contractors.

“We are making progress, but it is the local contractors themselves who should work hard to ensure that they do not compromise the quality of work on all projects they are given. My Government will not accept poor standards because the aim of the policy is to build capacity among our local people,” he said.

President Lungu said implementation of the 20% subcontracting policy calls for everyone to be involved and not always blame the President when there was poor workmanship among local contractors.

Housing and Infrastructure Development Minister Hon. Vincent Mwale told the President that the Luwingu-Nsombo-Chaba-Chilubi road project was being implemented through the output and performance road contract for design, rehabilitation, improvement, routine and periodic maintenance of approximately 3017 km of roads in Central, Copper belt, Northern, North-Western and Western Provinces.

He said the total cost of the 5-year road project was US$312 million.

“This road your Excellency falls under the first phase of 1000 km of roads being done. The funds for this road will be provided for under the first initial approved funding of US$50 million to cover 400km,” Hon. Mwale said.