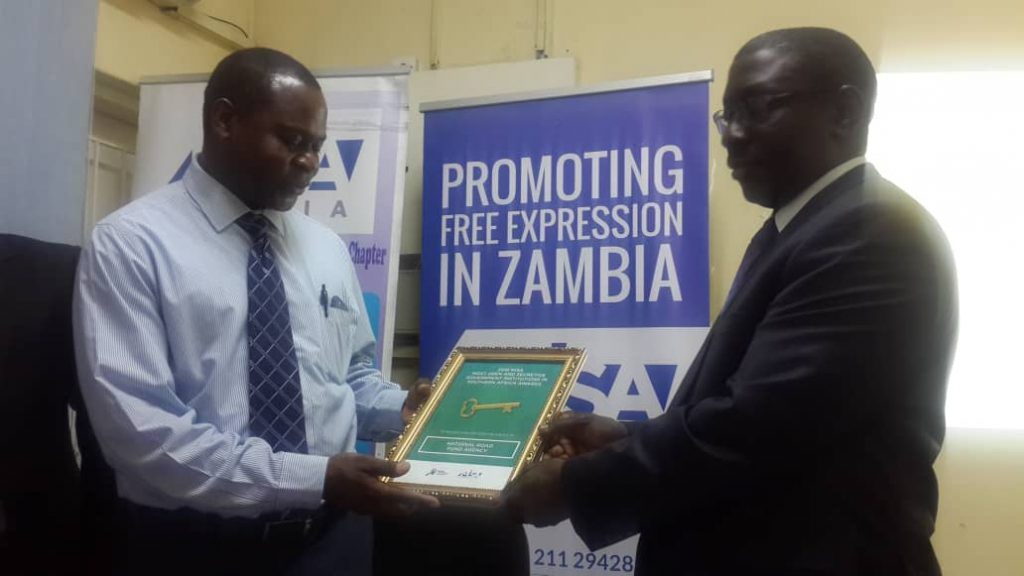 The National Road Fund Agency (NRFA) has scooped this year’s Media Institute of
Southern Africa (MISA) Zambia Golden Key Award as the most open and accessible
Public Institution in Zambia among the eight Government Ministries and Public
Institutions that were randomly sampled.
Presenting the award on behalf of MISA, Jesuit Centre for Theological Reflection
Executive Director Emmanuel Mumba said the NRFA was helpful throughout the
survey, even though the Agency did not know the purpose of the survey and responded
to the request for information in record time and called the researcher to discuss the
information request in more detail.
Fr. Mumba noted that the NRFA was a beacon of hope in countries like Zambia which
are conformated with an urgent need to improve their economy, strengthen institutions,
modernize public administration, and fight corruption through access to information.

And speaking at the same occasion, MISA Zambia Chairperson helen Mwale said
public institutions in Zambia were not bound by any legislation to give information to the
public on demand adding that what was mainly employed was discretaion and goodwill
by officers in these institutions.
In a speech read for her by her Vice Chairperson Hyde Haguta, Ms. Mwale said based
on the findings, MISA Zambia was concerned because most of the institutions surveyed
conducted business on behalf of the public who fund them through tax and were
created to serve the citizens.
And receiving the award, NRFA Director/Chief Executive Officer Eng. Wallace Mumba
stated that the award was in tandem with the Agency’s modus operandi which bordered
on its core values of Transparency, Accountable, Integrity, Team Work, Innovation and
Excellence.
Eng Mumba stated that as an Agency mandated to manage and administer the
resource envelope for the road sector in Zambia, public trust, transparency and
openness were key ingredients to the Agency’s operations and had always kept its
doors and books open for scrutiny with a proud record of producing unqualified audited
accounts for the 12 years that NRFA had been in existence.
“We are the lead Tolls Agent in the implementation of the National Road Tolling
Programme and also mobilise resources from other sources such as fuel levy, road tax,
government appropriations, loans and grants and such, key stakeholders need to know
how these resources are utilised for them to appreciate Government Programmes on
the ground,” he said.
Among the Government Ministries and Institutions randomly surveyed were the Zambia
Revenue Authority (ZRA), Zambia Public Procurement Authority (ZPPA), Ministries of
Gender, Agriculture and Livestock, Community Development and Social Welfare, Lands
and Natural Resources and Information and Broadcasting Services.
Since 2009, MISA has evaluated the level of openness of public institutions in its annual
Transparency Assessment to establish the ease or difficulty with which citizens can
access public information.
The study assesses whether public institutions proactively make relevant information
available through online presence and evaluates to what degree information is made
available to citizens upon request.