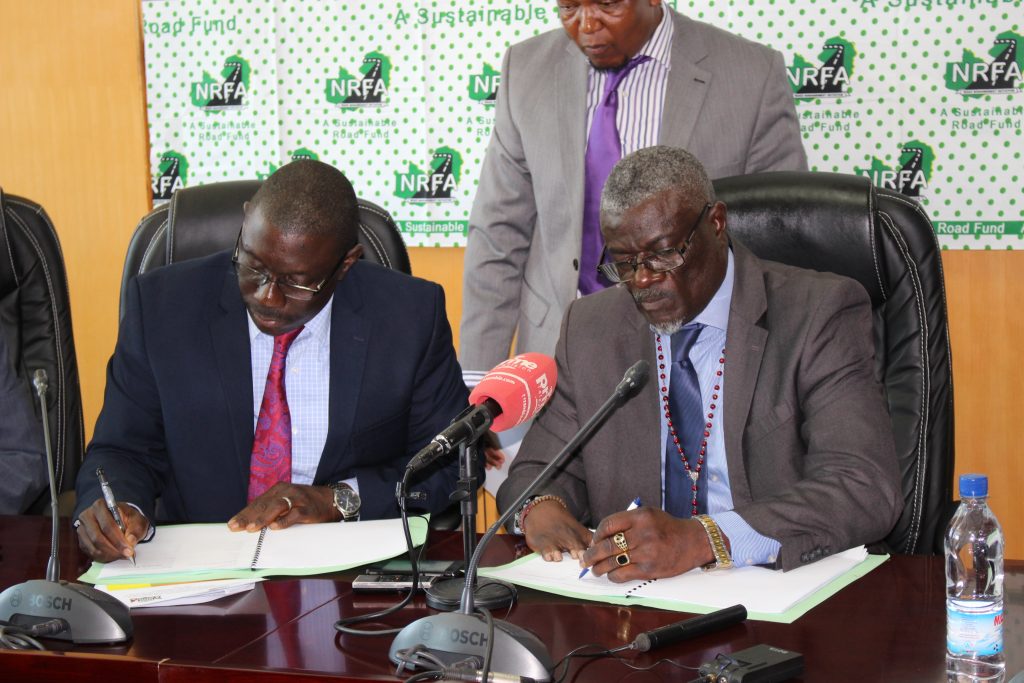 The NRFA is driving the intra and inter Agency agenda leaving no stone unturned in reaching out to various stakeholders in the spirit of strategic partnerships and pushing the idea of inclusive development.

In this vein, and in light of the outbreak of animal diseases the country has experienced in the recent past, the NRFA and Ministry of Livestock and Fisheries have penned a Memorandum of Understanding which will see the use of toll gates as a platform to monitor animal and animal product movements.

Speaking during the signing ceremony, Ministry of Livestock and Fisheries Permanent Secretary Dr. David Shamulenge said Government attached great importance to mitigating animal diseases that threaten food security, income generation and wellbeing of the Zambian people and applauded the NRFA for cooperating with his Ministry in its efforts to combat animal diseases.

“I, therefore, want to commend your institution for agreeing to partner with us to utilise toll gates as animal disease control checkpoints-an initiative we believe will tremendously reduce illegal animal movements and save the country from the rampant costly disease outbreaks.”

He added that population growth necessitated movement of animals and animal products which in turn increased the need for finding innovative ways of preventing animal movements and disease spread.

“It is indeed a great pleasure for me to witness this cooperation through the signing of this Memorandum of Understanding between the Ministry of Fisheries and Livestock and the National Road Fund Agency. This is a very important milestone in the prevention and control of animal diseases.”

And NRFA Director/CEO Eng. Wallece Mumba said the Road Tolling Programme had progressively continued to register growth in toll revenue collections since commencement, with average annual revenue growth of 29% over a five year period from 2013 to 2018, which huge traffic numbers he said would benefit the Ministry of Fisheries in its quest to monitor animal movement.

Eng. Mumba, said that the Agency was happy to avail its toll stations to Government wings to avoid replicating infrastructure development and maximise on development of a multi-sectoral one-stop facilities adding that the Agency was greatly humbled by the support and cooperation it had continued to receive from various sectors of the economy which had enabled it to publicise its mandate of Resource mobilisation, Fiduciary Management of Resources and Value for Money.

“The Ministry of Livestock and Fisheries will find our toll gates a useful platform to conduct their surveillance and disease control activities without interrupting the normal road tolling operations,” said Eng. Mumba.